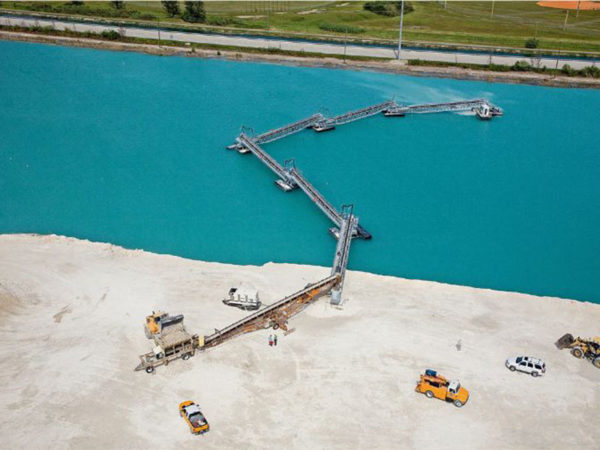 Contracted by the City of Homestead, Ryan was to restore an over excavated quarry lake to a proposed elevation of (-) 52.5 when in fact over two-thirds of the lake exceeded that elevation by 20-30 feet. Blasted limerock was available fill from the adjacent areas of the mine. The contract with the City of Homestead Florida stated that there will be no pay for any fill placed above elevation (-) 52.5, so the system used for the work mandated very precise controls. The Solution: Reduce the rock to a size that could be transported to the lake using a floating conveyor system. Then build a self-positioning placing barge that would dump the crushed material in locations determined by a satellite positioning system. When the final measurements were taken, 400,000 tons of material was placed and no additional material was needed…another successful project.Formerly known as Broken Wood Country Club, we converted the South portion of the abandoned golf course into a community of Seven three-story apartment buildings, Sixteen two-story townhome buildings, a clubhouse and a city owned park on 40 acres. Ryan was contracted to perform the total site improvements inclusive of all earthwork, utilities and paving. Once the clearing and grubbing operations were complete, arsenic remediation began with the development of three new lakes and strategically placed contaminated materials. Additionally, the site utilities consisting of storm drainage, sanitary sewer, and potable water was installed followed by the roadway subgrade, base course, asphalt paving, concrete sidewalk, curb and gutters. The site also required off-site utility improvements on University Drive and Sample Road.